In the mid-1840’s it became apparent that Mexico’s hold on California could no longer be retained and governors of the province began the process of making land grants. In 1845 Rancho Temecula was granted to Felix Valdez.

In 1886, W. J. Holmes and Aaron Frost discovered an excellent deposit of granite in Temecula Canyon.  The San Diego Union aptly described the event in an article entitled, “A Fine Strike of Granite.” According to the article, the granite quarry in Temecula was billed as one of the “richest granite quarries in the United States.  Fine quality Temecula granite was used for headstones, hitching posts, and curbstones on San Francisco’s Market Street.  Throughout Old Town, small hitching posts made of the granite still stand in front of the Temecula Mercantile and Temecula Hotel, and the steps to The Bank are formed of granite from this quarry. 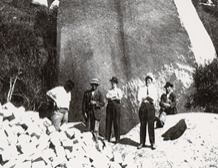 Near Temecula there are several quarries, which have been working a large force of men. Contracts have been signed with the Pacific Electric people of Los Angeles for 400,000 paving blocks to be cut. At present there about twenty Swedes working in the canyon, turning out three or four thousand blocks a day. For cutting these blocks the men get $45.00 per thousand blocks. The blocs are hauled by wagon to Temecula and shipped to Los Angeles.  Many of the men make as high as $5 and $6 a day for eight hours work.

The Cottages at Temecula Creek originated from those early days as a quarryman’s camp.  As the quarries grew, the need for living quarters also grew.  Many of the men came from out of state and needed lodging.  Small tent encampments sprung up on the outskirts of the quarries.   In 1934 the tents were replaced with six cottages that would stand for the next 81 years.  In 2015, each cottage was meticulously remodeled and brought up to modern standards on the inside while retaining the original charm that attracted us to this amazing property.

One of the things that make The Cottages so special is the stone work that surrounds the property.  One can imagine the quarrymen bringing remnants of their work home and building pathways and monuments that would become their legacy.  From the hitching posts, to the stairways, to the gran